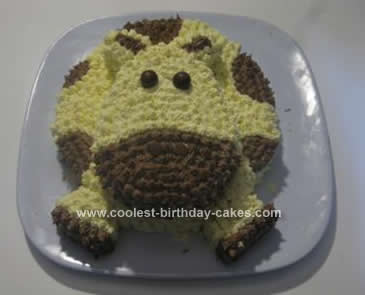 I used a similar template to one that I noticed on here, although I made some small changes for this Cow Cake.

I bought two packs of two rectangular sponges (9.5cm x 19cm), I placed them side by side and marked out a large circle with the end of a metal skewer. I then cut the shape out with a serrated egded knife. I used another single sponge to mark out two small sem-circles to fill out the sides to make it look more circular instead of oval. The legs were cut from this sponge as well.

One more rectangle sponge to cut out the face, again mark it out with a metal skewer before cutting. The ears were from the corners of this sponge as well. You will have half of one sponge left over if needed.

I used a basic buttercream recipe – the White was 250gm of butter, 450gm icing sugar, and 2 tbsp of milk. Beat it all together till light and fluffy. I used this to smear a thin layer of the entire cake, and also to stick the legs, ears and extra circle pieces in place. Chocolate buttercream recipe was 125gm butter, 200gm icing sugar, and 2 tbspn of cocoa powder, and 1 tbsp of milk. Again beat until light and fluffy.

Piping was done with a small star nozzle. I did the white first as it was easier to mark out the spots for the brown. The eyes are malteasers and the nose is two choc buttons that I trimmed down to size.

This is the first cake I’ve ever made like this and it was very easy, although time consuming, but it looks great.