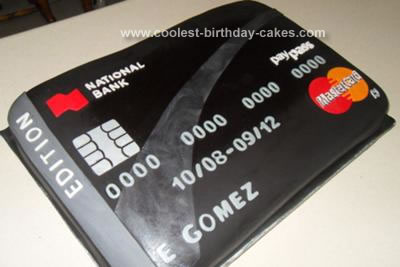 In keeping with the “Black Edition” theme for its booth at a local street festival recently, I made this homemade credit card cake based on one of the bank’s credit cards. It was a resounding success. The cake was brought out around noon and was evidently devoured by about 100 passing patrons within 30 minutes! It was also great visibility for me and my fledgling business.

I had begun the detail work on the cake about 2-3 weeks prior to the event. This included cutting out all the lettering to-scale and preparing the logos. Everything was made of fondant and a bit of the detail was drawn on using edible black marker. About 4 days prior to the festival, I made two ½ – slab (12” x 18”) chocolate slab cakes from a new recipe (and one which will probably become my go-to chocolate cake recipe from now on).

I layered the cakes, after chilling and trimming the corners for the rounded effect, using tinted buttercream icing. Initially I had thought of tinting the icing red but it turned out to be pink because the red would have taken too much coloring and time. I also crumb-coated the cake, but just barely had enough icing (I’d made close to 8 cups). So I made another 3-4 cups and put a second layer of buttercream (this time, white) all over the cake, scraping the bottom of the bowl for every last bit.

While I let the cake chill again, I rolled out about 7 lbs of black fondant into a large rectangle, about 20” x 24” (maybe a little more as it was beyond the borders of my pastry mat) and, with my husband’s assistance I flipped the fondant over onto the cake and peeled it off the mat. I find this works really well with a large cake. From there, after smoothing it in place and trimming off the excess, I was able to begin placing the fondant cut-outs.

The surface of the black fondant was slightly sticky so I did not need to brush on much water on the fondant pieces before laying them down. That being said, I also needed to place them carefully the first time because they were difficult to move around. Finally, I brushed on pearl dust (mixed with a little vodka) to achieve the metallic look of the lettering and the chip. Voilà!