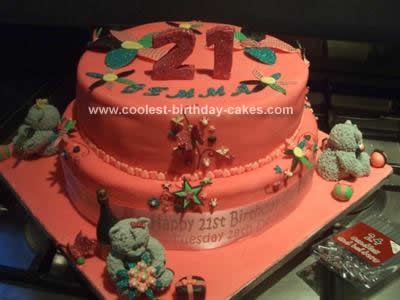 Cut out lots of black icing small hearts. Cut out med size butterflies in pink icing and place inside an egg box to dry that shape. Cover in edible disco pink glitter, when dry glue to a small sausage shape green icing for the body.

Cut out gerbera flowers in different coloured icings and let them go hard. I covered some petals with glitters. I drew dots and stripes also. When they were dry I rolled a ball of pink or yellow icing and flattened it then glued the petals to the back to make a flower.

Using gray icing, roll out and shape 4 small balls and 4 large balls for the heads and bodies. Using a cocktail stick prick the gray icing of the balls when they have been left out to dry for a while. It creates a furry look. Mark on the heads down the centre for the stitching and on the bodies too. Roll our 4 very small balls of gray icing, flatten them slightly with your thumb and cut in half. Push a small ball tool into the centre of each one and glue them to the heads for ears. Roll out some gray icing very thin and cut out small squares for the teddies patches, when dry mark the stitches with black pen and glue to the head and body. Roll out a sausage shape of gray icing and in the centre press down with your thumb. This becomes the arms. Glue the centre of the flattened sausage to the body and then the head on top. When it is dry prick the arms to get the furry look, carve in one arm some stitches and colour in with black pen. Roll out two small fat sausages and make them into “L” shapes for the legs. Make sure the feet are oval shaped and flat. Prick the legs to get the look and glue to the body at angles. Roll out some gray icing thinly and carefully cut out oval shapes to go on the soles of the feet. When the oval shapes are dry, mark the stitches and write your messages on them. When they are dry, glue them to the feet. Roll out 4 small balls of grey icing and cut in half. Glue these to the face of the head for the mouth. Mark a small mouth in the black pen. Roll out pastel blue icing thinly and carefully cut out very small triangles to glue on as the nose. Roll out 8 tiny balls in black icing, pick them up with a cocktail stick, apply some glue and attach to the top of the nose for eyes. Add the accessories, i.e. plastic gold key. Shape some icing into balls and cubes for small gift boxes and wrap strips of icing in contrasting colours for ribbons. Cut out bows and glue them all together. They are so cute. I added a flower to the head of one teddy. A bow covered in disco pink glitter to another teddies head. I cut out a crown and tried to glue some glitter on to make jewels, then put it on another teddies head. The last teddy had a cone shaped out of yellow icing and then glitter covered tiny stars glued on to look like a party hat.

One of the teddies is holding a bunch of pink flowers. Cut out a green circle and glue pink flowers to it. When dry glue on white dredges. I cut out a gerbera flower in green icing and covered some of the petals in sea green glitter. Theses were then glued to the back of the green circle icing. With a ball of green icing I threaded a few strands of wire into it and glued it to the back of the flower petals. This was put in between the teddies hands.

Once I had all my decorations ready and my ribbon arrived in the post I covered the cakes with the pink icing. I hid the join of the top tier with the tiny pink hearts. I got sheets of A4 paper and drew out a pattern and placed the decorations on top. This was my guide to follow when applying it straight on to the cake. I started by drawing on in black pen my swirl shapes and then added one by one the tiny decorations. I used a medium sized star, flower or butterfly on each design.

Top of the cake:

Numbers: Roll out some pink icing quite thick then cut out a 2 and a 1. Insert a cocktail stick into the base of each number. The no. 2, I used one cocktail stick cut in half and pushed both in the base of the number. I covered the numbers in disco pink glitter and left to dry and placed on the cake last.

Name: I used an alphabet cutter to cut out the letters. Covered them in glitter and glued them very carefully to the cake.

Large flowers: I used the leaf cutter to make the large flowers on the top of the cake and decorated them the same as the medium sized flowers.

I really enjoyed creating this Homemade 21st Tatty Teddy Bear Cake. It took a lot of my time but it was worth it. 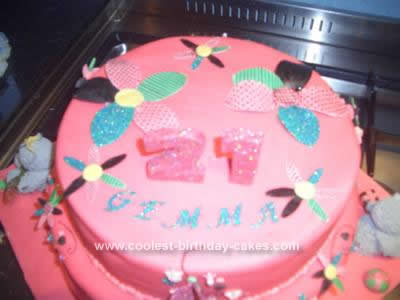 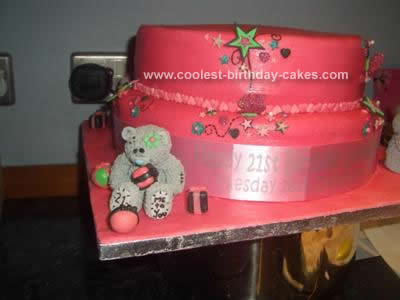 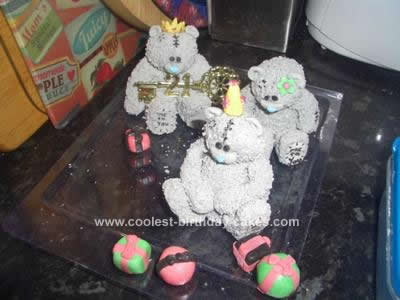