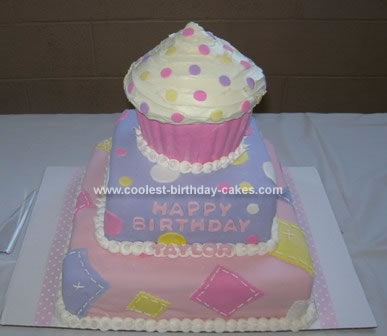 I made the fondant using marshmallow and powdered sugar (Google “MM Fondant” for recipe). I made several batches of fondant and colored each with Wilton icing gels. Each color of fondant was wrapped tightly until I was ready to use it.

I stacked and iced the matching square layers using store bought icing. I rolled out the pink fondant to cover the bottom layer and purple to cover the other square. I decorated each layer with several colors of fondant. I made square “patches” for the bottom layer and used a small icing tip to outline them. The smaller square was decorated with circles that I cut out with cookie cutters.

I inserted plastic pegs into the bottom layer toward the center. I placed the smaller square on a Wilton separator plate and placed it on top of the larger layer. I made the letters with fondant using a Wilton letter set. I “outlined” each cake in icing with a large round tip.

For the cupcake, I first leveled each of the two parts to make sure they would fit together. I iced the bottom piece and covered it in fondant. I used the handle of a small paintbrush to smooth the fondant into each ripple of the cupcake. I placed a small amount of icing on the top of the cupcake base and placed the top piece on it. I iced the top part of the cupcake and decorated it with Wilton Jumbo Confetti Sprinkles.