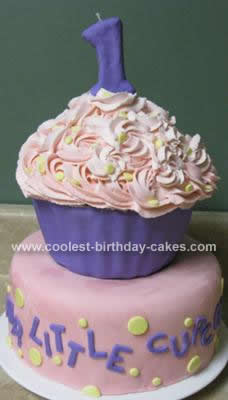 First, I browsed through the pictures on this site for ideas. I combined my favorite features from the photographs and came up with this Giant Cupcake First Birthday Cake Idea.

For the bottom layer, I baked a chocolate cake in two Wilton 8 in. x 2 in. pans. I cooled them, covered one layer with buttercream and placed the other layer on top. Then I covered it all with white buttercream icing. I made the marshmallow fondant from scratch, and tinted about two-thirds of the batch of fondant with Wilton’s “Rose Petal” coloring gel. I tinted a 1/4 cup of the fondant with Wilton’s “Lemon Yellow,” and then the remaining fondant with Wilton’s “Violet” gel. I rolled out the purple fondant and cut out the letters to spell “Our Little Cupcake is One!” with a set of Fox Run’s mini alphabet cutters. I attached them to the cake by brushing them with clear vanilla, and by gently pressing on them. I inserted three supports in the center of the cake to prepare for the giant cupcake.

Lastly, I cut out some polka dots/sprinkles using both ends of Wilton’s #12 tip. I attached them with vanilla on the 8 in. cake, and then sprinkled/placed them over the giant cupcake to make sprinkles.

I used a big “1” birthday candle for the topper. I simply wrapped purple fondant around the candle. I will not be using that candle to light and sing, since my daughter has her own cupcake. This is just for decoration!

This was a fun cake to make!