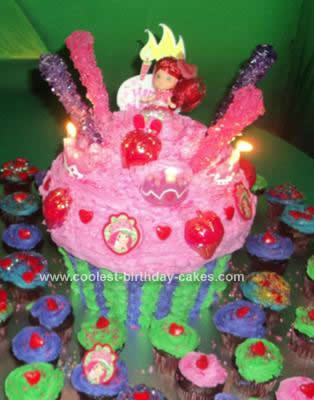 This is a Giant Cupcake Birthday Cake I made for my niece’s 4th birthday. The pan I rented from a cake store. I used Duncan Hines chocolate cake mix, but I made a pound cake by adding a package of instant chocolate pudding and 4 eggs. I baked the top portion first then the bottom portion. I found this to be easier as the bottom is a bit thicker and needed to cook longer.

I did a crumb coat on both layers then placed in the fridge to set while I mixed my colors. I used a buttercream icing to decorate the cake it sets up nice and hard (not to hard like royal icing). To ice the cake I used my star tip (#17 Wilton), starting with the bottom of the cupcake. Purple stripes then my green stripes. To ice the top of cupcake I started at the bottom and worked my way up to tip in a swirl motion ( it’s on pretty thick) to look like an actually iced cupcake.

After I was done icing the giant cupcake I placed the store bought decorations on it and placed back in my fridge. Then using another cake mix I made mini cupcakes iced in same colors as giant cupcake to place around the bottom of cake. I really enjoyed making this cake hope you enjoy as well.