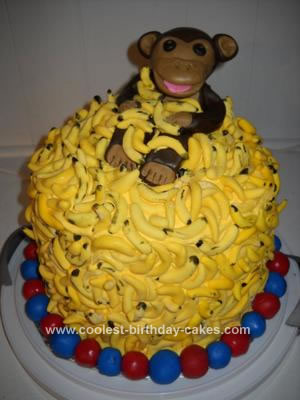 My son wanted a monkey cake for his birthday so we went searching on the net for inspiration. We came across a picture of a cake with a monkey sitting on a pile of bananas…of course that is the one he loved.

I am not a professional baker or anything so I was scared. But I love crafty things and science so…put it together and this is what happened.

This was the first cake I made with MMF. I had an old family chocolate and vanilla cake recipe that I used–nothing unusual just plain and simple. Baked 4 9″ round cakes and let them cool. Then we alternated layers of chocolate and vanilla cake with whipped vanilla butter cream and chocolate fudge icing. I “dirty iced” the whole cake with yellow tinted vanilla butter cream. We used 4 pencil thickness dowel rods, shoved down into the cake layers for stability.

Made a huge batch (triple batch) of MMF dyed yellow with the Wilton yellow gel. Then 3 preteens and I sculpted the bananas. We just pinched about 1-1 1/2 inch long and 1/4 inch diameter “worm” shaped chunks off the mound of yellow MMF. Then acted like preschoolers playing with play-dough, tapered the ends and rolled it about to get a banana shape, repeat a million times! Or just enough to cover whatever it is you want to cover. Use cornstarch on hand and surface to keep the stickiness at bay and it goes away with water when the final step is done. We put ours on parchment paper in the middle of the kitchen table to harden.

They monkey was also made from MMF and Wilton gel coloring. The dark brown was frustrating! We wanted it darker than the brown the multi pack came with but not black. It took mixing and kneading until the right color came about…it darkens upon standing too. The fleshy brown color was the original brown and a touch of peach. The tongue was the pink and eyes black. The ears were attached with water and toothpicks as were the arms and legs to a rectangular shaped body.

He had a fleshy colored belly. We built up a little chair with the yellow MMF of the top center of the cake, just enough to prop him up with and make him not fall back. We used bamboo skewers up his back side and down into the chair/cake for more stability. We used toothpicks and forks and scissors to add the details of nostrils, fingers, nails.

Once he was on there we just started pressing on bananas. If the icing was dry we just used a touch of water to make them stick and if that didn’t work we used a dot of the yellow butter cream icing. Then we used some red and blue MMF to roll in to balls for a border.

Everyone thought it was going to be a banana flavored cake and seemed turned off by that but once I told them it was regular old choco and vanilla cake the smile returned. It was easier to cut once we removed the monkey from the top and then lifted two of the layers off onto another platter. It served about 30 kids and adults easily.

Next time for the ball border I would make a “snake” shape of uniform diameter and then cut off chunks of the same size then roll those chunks into balls. I think it would make them more uniform in size/shape.

Lastly use vodka or water to erase any corn starch or dark dye that may have bled onto the lighter areas, like inbetween the bananas and onto the icing. It kept in fridge for a day fully assembled with no issues. 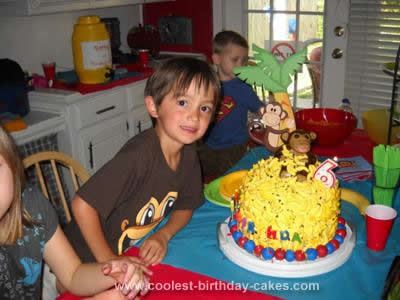