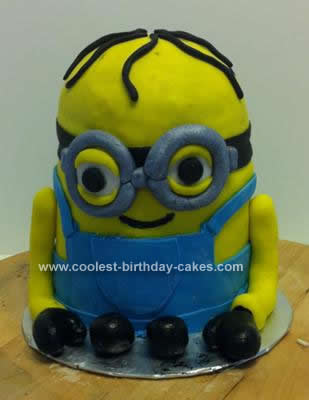 For my son’s 2nd birthday gathering I made a Despicable Me Minion Birthday Cake.

He is entirely cake, buttercream and fondant. I had to cover his dome cake head with fondant and add it to his body which was already covered with fondant. Then I placed the black strip for his glasses to cover the gap (though I didn’t get his eye piece exactly right and he looks a little sinister- which I wasn’t going for). But overall he’s a pretty cool little minion.

He is entirely vanilla cake layered with rootbeer buttercream frosting and covered with marshmallow fondant (I find my kids prefer it than the other stuff). His arms and little tiny legs are completely fondant while his body is the cake in fondant.

He took me 3 days to make only due to the fact that I had 3 other cakes to finish for my son’s pinewood derby’s silent Auction the day before.