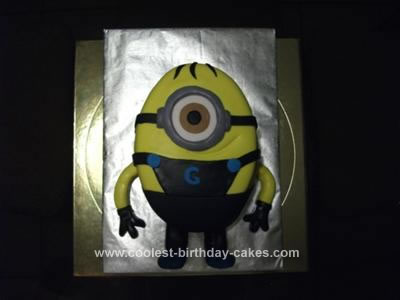 This Despicable Me Minion Birthday Cake is my first Minion Character cake that was made for a birthday of a true fan of this movie. So for the Minion Character cake I made his body from a Wilton oval “7-3/4x 5-5/8” pan. You will need about 2 pounds of white fondant to cover and decorate him.

The cake was vanilla with hazelnut filling. Once I filled it and crumb coated the cake with butter cream, I placed it in the freezer for an hour. Once the cake comes out of the freezer nice and stiff the marshmallow fondant will go on smooth. Spray the entire cake with water so that the fondant will stick.

For the hinges on the mask I rolled out some grey fondant and cut 2 small strips. I took the back part of a skewer and made an indentation on the cake for his smile. I cut out 3 strips of black fondant and attached them with water to the top of his head for his hair. For his arms I rolled some of the yellow fondant with my hands to form the shape. I inserted a toothpick to the fondant arm and attached it to the side of the cake. For his hand I took a small ball of black fondant and shaped it into a square. I took a cutter and made 3 slits for his fingers. Once you make the slits roll the fondant with your hand to make his fingers round. I then attached it to his arm with some water. I then used a small strip of black fondant to cover where the arm and hand met. For his legs I rolled some black fondant into the shape of a rectangle and inserted a toothpick to attach to cake. For the shoe I rolled a small ball of the blue fondant and shaped it. I attached it with some water.

The cake turned out really great, she loved it.