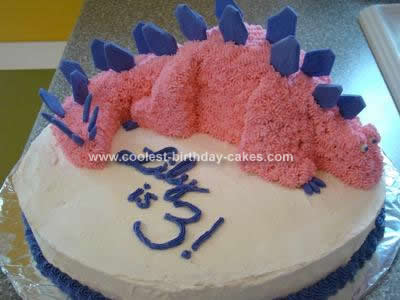 My daughter requested a dinosaur-themed birthday party for her third birthday, including a Homemade Dinosaur Birthday Cake Idea. The catch was that she wanted a pink and purple dinosaur party!

I modified the dinosaur head, because I thought the original looked more like an iguana, and it was hard to prop the head so it stood up like in the original. I used a piece of cake for the head that lay flat on the cake, so there was no concern of it falling down, especially during transport in the car to the party. One helpful tip for the dinosaur cake: I baked the 9″ rounds in advance, froze them overnight, and then cut the pieces frozen. It really helped with the ease of cutting out the somewhat intricate pieces. Freezing will also help with frosting, so you don’t get as many crumbs in the frosting.

Since I needed the cake to serve quite a few people, I first baked a large (16″ single layer) round cake for the base. This large cake required a baking core in the center of the pan to ensure even baking. I frosted the round cake first. I assembled the dinosaur on a cookie sheet to make sure all the pieces fit together well, and then carefully transferred the pieces to the top of the round cake, using buttercream to hold the dino pieces together. I frosted the dinosaur portion once it was in place on the round base, using a thin layer of pink buttercream for a crumb-coat, and then finishing with a star tip (I love the Wilton buttercream recipe for ease of decorating and for great taste).

For the spines of the stegosaurus, I used the Wilton marshmallow fondant recipe. This was my first time to try making and using fondant, and it was much easier than I had anticipated! The fondant is a bit messy as it comes together, but then it is extremely easy to work with. If you have been nervous about trying to make your own rolled fondant, start with this simple recipe. You will be surprised how easy it is. I colored the fondant with Wilton gel coloring (added to just the melted marshmallows, before adding the powdered sugar). I rolled it out to about 1/8″ thick, and cut the shape of each spine (which was basically a diamond shape with the top and bottom points trimmed off). I cut smaller spines to use down the dino’s tail. I used a toothpick to lightly draw a few lines the length of each spine, for texture.

I pushed a toothpick into the base of each spine and then let them dry out a bit overnight on a waxed paper covered cookie sheet. This helped them firm up before adding them to the cake. The day of the party, I pushed each spine down the back — two rows down the back, each spine slightly offset from the one across from it. More formed fondant was used for the toes and spikes on the tail.

The eyes of the stegosaurus were a bit more marshmallow fondant, left white and rolled into balls. Purple piped icing was used for the pupils. I used just a couple more frosting stars above each eyeball, to create the look of an eyebrow ridge.

The kids at the party (and even more so the adults) loved this cake. We held my daughter’s party at a museum that had a dino exhibit, and the party coordinator there asked me if I’d be interested in supplying cakes for all the kids’ parties there. I laughed and said I’d have to charge $400 for my time because, I’m not going to lie, this cake took me a loooooong time! I created it in stages over several days, and my mom had to babysit my three-year-old and four-month-old while I worked. I’m probably not quite ready for the professional cake decorating business yet, but I had a lot of fun with this cake! 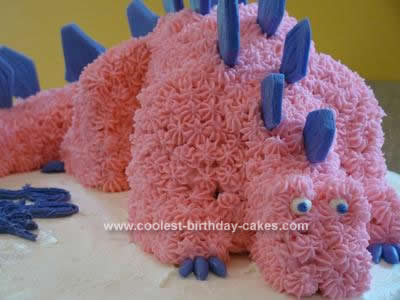