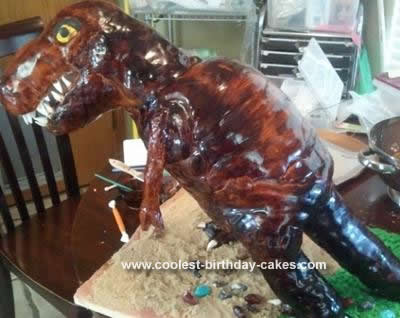 A friend approached me to make a standing T-Rex birthday cake for her son’s 3rd birthday. At first I declined because I had never made a 3-D cake of that size. I looked on-line and didn’t see many pictures for ideas. Finally, she pressed me hard enough and I thought about it long enough that I decided to try a Homemade T-Rex 3D Dinosaur Birthday Cake.

I studied pictures of dinosaurs and looked at YouTube and the internet for 3-D cake sculpting tutorials. A trip to Lowe’s got us started with a large piece of board and PVC pipe of various sizes. We built a sturdy frame that included a flange screwed to the wood, a frame for his legs and tail, a sturdy base for the cakes/body, and a frame to build his head.

The cake was strawberry with vanilla buttercream, all homemade. The marshmallow fondant was also my recipe. Rice Crispy treats were used for his head and for his tail and legs. In the end there was about 8 or so layers of cake and buttercream carved to resemble the body. I struggled to cover the cake with fondant, because it didn’t want to hold on his underbelly and chest. I recalled seeing how often modeling chocolate is used on some of the cake shows on television and decided to try it. It worked like magic!

I was able to cover the dinosaur easily and shape and mold the chocolate on his tail, underbelly and chest. I covered the rest of him with fondant. I used dark brown with a small amount of vodka to paint the white fondant and it left him really shiny. His teeth I made of sugar paste and I used water to “glue” them in his mouth. I covered the board with fondant and used green buttercream to create the look of grass. I definitely need to work on getting my fondant lines smoothed out.

The cake was heavy and putting it in the car to deliver it across town to the party was a real nail biter. It felt like we hit every bump in the road, but we made it with only one small problem that I was able to fix when I got there. The cake was a huge hit. 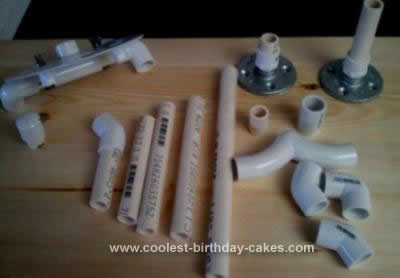 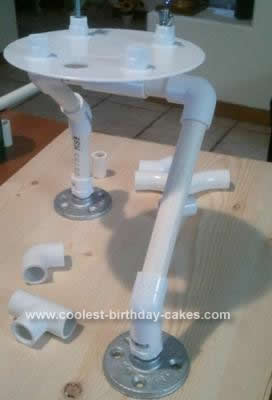 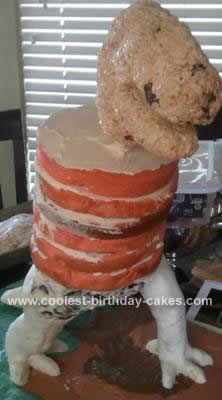