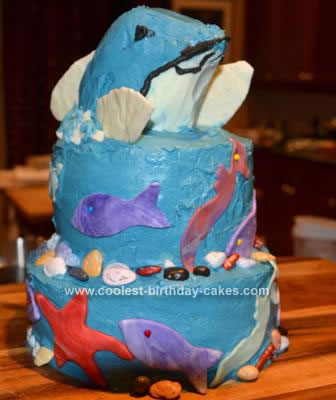 This Dolphin cake is based on pictures on this site – they gave me the basic plan (dolphin 5 and dolphin 11 mainly). This was my daughter’s birthday cake last year, her request.

The cake was a yellow cake, but of course a sturdy chocolate cake would be fine too. It’s 3 recipes divided between 2 8″ cake tins (2 recipes, so 4 layers) and 1 6″ tin (I had to save half the batter and bake it after the first one came out, as I only have 1 6″ tin).

I then filled and stacked them as you can see, and iced it with blue icing.

The personage sticking out of the top is made out of rice krispie square mixture, molded to look, I hope, like a dolphin. He also was covered with blue icing, his tummy with white icing. There is an attempt to make waves (with white and blue icing) around his back, not sure how successful that was, but they are there. His mouth and eyes are drawn with black icing.

His flippers and fin are made of white chocolate. I melted white Melton wafers – you know those chocolate circles (bulk store)- then put some in an icing bag and drew the outline of the flippers and fin. When that hardened somewhat (the fridge helped speed that up), I filled them in with the rest of the melted chocolate, or however much I needed. When they were hard I pushed them into the icing on the body.

The fish and sea stars and sea horses on the sides are rolled and tinted fondant. Knead food coloring into fondant until it is the shade you want, then roll it out and cut with cookie cutters (unless you’re a genius freehander; I am not). The rocks are chocolate rocks; I got these at a fabulous bulk store here in Toronto at St Lawrence market.

It was a great hit.