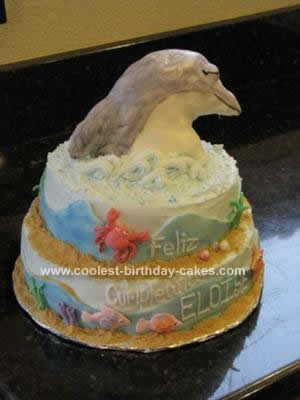 One of my daughter’s fellow dance classmates was having a 7th birthday and her mother wanted a special Dolphin Cake Design, as her daughter LOVES dolphins. Her family are bilingual, hence the “Happy Birthday” on one side and “Feliz Cumpleanos” on the other.

We came up with this design. I formed the dolphin out of Rice Krispy treats the night before. Then I covered it with buttercream and fondant. I also made the little sea creatures out of fondant the night before.

I filled and assembled the bottom and top layers (being sure to support the top layer with wooden dowels.) After frosting it smooth with buttercream, I began to add the fondant decor (starting with the water)

I crushed graham crackers for the sand around the top of each layer. I painted the dolphin (with Wilton food coloring) after it was completely assembled on top of the cake. I used a star tip to make the waves around the dolphin and added some blue sprinkle/shimmer.

The little girl and her whole family were so pleased, not only with the design, but the taste of the cake. The kids even ate the rice krispy dolphin!