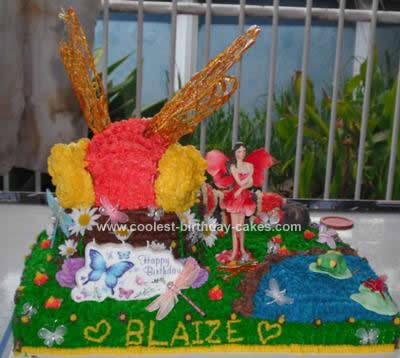 Here is a Dragonfly Birthday Cake I made for a young girl’s birthday who loved dragon flies. I set out on a quest to make something different.

The cake consisted of 10 pkts of cake mix and 16 jam donuts. Wow, a lot of baking. Later I ended up with 2 slabs, rectangle size, a tall round one and a bar cake. The problem that I tried to overcome with this cake was I wanted the dragon fly to have a 3d effect hence the donuts and through the donuts are many wooden skewers….but this was still a very difficult task.

the other difficult part was the wings were made of toffee but were very brittle so many wings were made and broken. The statue on the cake was bought and there are silk flowers and dragon flies and butterflies all over the cake. Butter icing piped on the cake gave the colourful effect I was looking for and the frog and lillypad were made out of fondant icing. The rocks around the pool are crunchy pieces.

This cake took around 3 days to fully complete, the baking being a major part of that but the decorating took around six hours. The cake was presented and the young girl was really impressed and the smile on her face was all it was worth, and thanks enough for me.