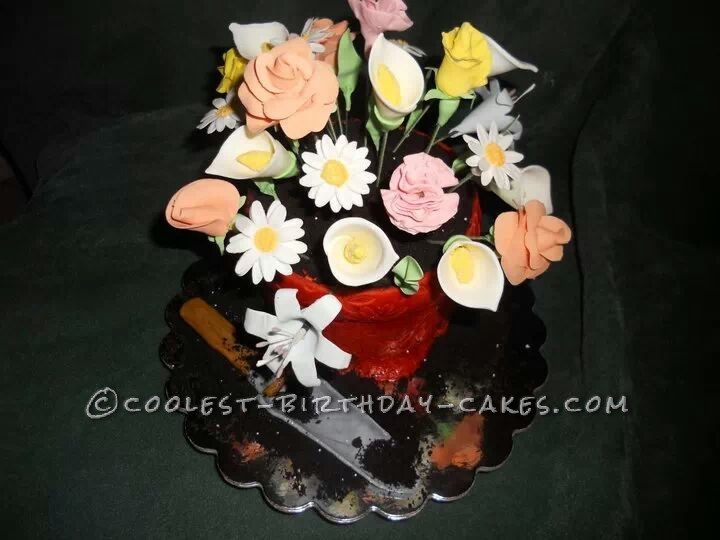 This flower pot cake was made for a dear friend I met in fourth grade.  She wanted something different for her mom.  To me different means, realistic, edible art.  I do have to say, the birthday girl and the attendants did not want to eat the cake after all.  In the end, curiosity got the best of them and they wanted to see if it really was edible.  The flowers were made of gum paste, hung and dried a day before the cake was made.  To give variety, different flowers were made.  This also gave contrast to the cake.

The cake was made with an eight inch round cake pan and stacked three layers high.  The cake was then shaved down to give the flower pot its upside down triangular shape.  Fondant was tinted a rusty orange and rolled onto a mat with an imprint of flowers and leaves to add detail to the pot. The cake was wrapped with the fondant (on the sides only) leaving a lip at the top and leaving the icing exposed on the top of the cake.  This allows the next step to adhere as well as add to its realistic perception.

The next step was to put Oreos in a food processor and blend till it looked like dirt.  Leave the Oreo center so that the “dirt” can clump.  Mix white sprinkles into the Oreo dirt to make it look like flower pot dirt.  Pour the dirt onto the top of the cake and press down to adhere it to the exposed icing on top of the cake.  Then I incorporated all the flowers made from the day before.  Adding loose dirt on and around the cake as a filler.  I then made a flower planting shovel out of left over fondant.  After the shovel hardened, I placed it in front of the cake and added dirt to it as well.