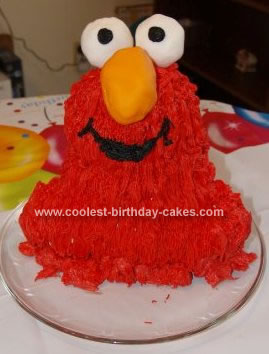 I made the Elmo 2nd Birthday Cake using Wilton’s cuddly bear stand up cake pan and cut off the ears. A note about that, the first cake I made I had 2 problems, one, the 6 cups of batter to fill the cavity was not enough to bubble up and over (which I think was due to the generic pound cake mix I used first, or I think it was) and I also only used Pam in the pan and the cake broke in 2 when I tried to remove it. Second time around, I used a Betty Crocker pound cake mix (combined with a box of yellow cake mix) and made some cake release (which I found on a website but cant remember where) the release basically is a mix of equal parts Crisco shortening, Crisco oil and flour, blended together, then brushed generously all over the inside surface of the pans This worked, the cake did not stick, but the core piece did stick even with this, so I just left it in. I also put in a little over the 6 cups to ensure the cavity filled completely.

The second cake came out very well, and I trimmed the ears off, dirty iced it with home-made buttercream, then chilled it overnight. Also, I used Wilton’s red gel color for the butter cream, and made the icing Thursday night, let it sit, and frosted it on Friday afternoon. By Saturday, the original pink color of the frosting had deepened to the red you see. I used a whole container of the color, not sure of the size but it was a smallish, probably around an ounce or so (maybe 2/3 oz) and added it to 6 cups or so of frosting.

I used a #233 grass tip for the frosting. With the little bit of excess batter I had from the cake, I put this in a large coffee mug (crock like u might see for french onion soup) and baked it. Then I cut up the sections of this little cake into blocks for the eyes and nose, then trimmed them to shape to eye balls and nose. After that, I dirty iced those pieces with butter cream (all on Thursday night).

Friday morning, I rolled fondant for the eyes, covered them, then dotted black icing. I used Wilton’s color orange for the nose, worked it into the fondant and covered the cake nose piece.

Friday afternoon I frosted Elmo, and Friday evening after the icing had set, I applied the eyes and nose with some tooth picks (2 in each eye and 4 in the nose) to the cake. I also tried to fill in a little frosting at the base but that didn’t come out as well as I would like.

Next time I will probably trim the base to be flat so that I don’t have to apply ‘fur’ frosting at the angle at the bottom, that was pretty hard!! and didn’t really work out well.

Anyhow, hope you like my cake. It was my first attempt at a decorated cake like this, so I am pleased with the amateur results.