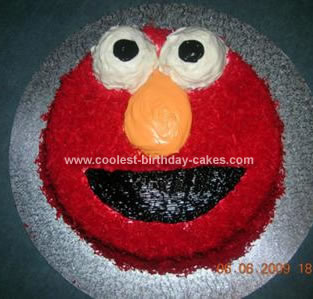 I made this Elmo Birthday Cake for my daughter’s 2nd birthday. She is obsessed with Elmo at the moment.

The cake is just a double layer vanilla with red food dye joined with vanilla icing. It is all covered with red icing before any features were added on.

I made the eyes from marshmallow snowballs with white icing. The nose was cut from a layer of the cake taken when I leveled it to join the two halves. I mixed some orange food dye with icing for the colour. His pupils and mouth were black writing icing.

Prior to any baking, I used a lot of red food dye with shredded coconut and partially dried it in a very low oven.