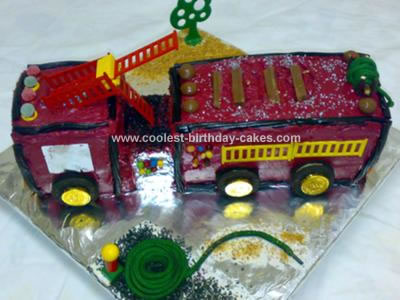 I was inspired by the many Fire Engine Birthday Cakes on this site and when my 3 year old son asked for a “fire truck” cake, I hoped it would be less daunting than I thought, and it was.

I baked 2 standard loaf cakes and 2 mini loaf cakes. I wrapped the 2 mini loaf cakes in foil and used as the centre “engine” before attaching the 2 loaf cakes at the front and back. I used ordinary butter icing but had to use 2 bottles of colouring and powdered colouring to get the deep red (which I still found too pink).

I didn’t realise that the taste of the icing would be so horrible thereafter:(beware the colouring you use- I certainly learned from my mistake). I used liquorish as a border around the truck and coloured sweets for lights and knobs.

We tied a green lace around pretzel sticks to create the desired effect of the fire hose and used one on the board as well from the “Lego” fire hydrant. The ladders were also “Lego” pieces that were just attached to the cake. Windows were cut from tin foil and Oreo biscuits were used as wheels.

It all took shape eventually and my 9 year old son and 7 year old daughter were both very helpful with their own inspiring ideas. 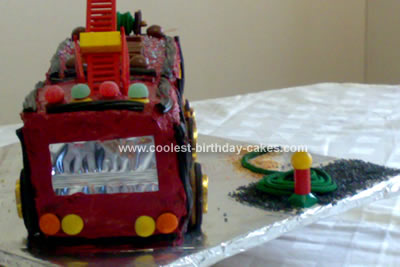