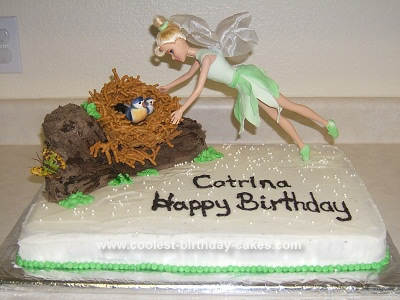 The idea of this Flying Fairy Cake Design started with a generic graphic of a pink fairy with a wand on my daughter’s invitation. My original plans were to make a dress for a doll using marshmallow fondant and then attach wings. After the dress dried I’d set her on a sheet cake and decorated around her.

I started looking for a doll that I could use as a fairy. I found the Ballerina Cinderella for $5 at WM. After playing around with different poses, I eventually came up with the flying idea. It helps that her toes are already pointed. I needed to give her a purpose for flying so I went in search of plastic flowers in my craft room and I ran across the birds. I actually wanted to stay away from a “Tinkerbell” theme cake and focus on the fairy idea but in the end Cinderella kind of looks like her anyway…oh well, it well worked.

The final process of making this cake was relatively easy. (I took the hard and long way about it, but if I had it to do over this is how I would do it.) The components of this cake are a cake board, sheet cake, log, nest, and fairy. The board is covered with heavy foil. The 12”x18” base cake was made using 2 Betty Crocker devil’s food cake mixes with an added large box of pudding and 2 additional eggs (for a firmer cake), white and leaf green butter cream frosting, cupcake gem pearls and a poker chip.

The log is made from 2 pre-made pound cakes frosted with chocolate butter cream and melted chocolate (also used for lettering). The nest is made from a butterscotch haystack recipe. The doll is a Cinderella Ballerina with marshmallow fondant dress and shoes, cupcake gem pearls, 2” wired ribbon, and 2 straight pins. The birds and butterfly are craft items.

Here‘s how to do it. Make the marshmallow fondant in advance. I used Peggy Weaver’s recipe. Using about a ½ cup of fondant, I worked in leaf green food coloring and then rolled it out to 1/8th”. I wrapped the doll in a piece similar to a toga with leaf strips cut at the bottom. I layered more leaf shapes in a darker leaf green to the skirt using a damp paper towel to wet only where I wanted needed them to stick. I then added a strip for a sash and hair ribbon. Finally, I covered her feet for shoes and added pearl accents. Twisting two strips of wired ribbon I created 4 wings that were held on using 2 straight pins pushed into the fondant on her back then she was propped up in a batter bowl and paper towels and left to dry.

The bird nest was made the day before. I halved the recipe for butterscotch haystacks found on the butterscotch chip bag and omitted the marshmallows. The nest shape was made by lining a cereal bowl with waxed paper and pushing the mix into a nest shape and then refrigerating it along with small haystack cookies that were used as extra nest debris.

I baked the sheet cake in a Wilton 12” x18” x 2” Performance Pan for about 35 minutes. After it had cooled completely, I applied a crumb coat then frosted it with white butter cream frosting. [After the log and nest were placed on the cake, I was able to calculate where the doll’s foot would be placed. This is where I put the poker chip to provide a platform and prevent her foot from piercing deep into the cake. If your frosting sets up quickly, you will want to place the chip now and frost over it as well as sprinkle the pearls while the frosting is still wet.]

I placed the nest on the log with extra haystack cookies for added support. The two birds were then set in the nest. The butter cream leaf green border and leafs were added and the butterfly placed. Lettering was done with melted chocolate (that was too cool to flow right).

Finally, the fairy was placed with a toe on the poker chip and hands on the nest for support.

The cake was a huge hit with everyone but most importantly with my 6 and 4.5 year old girls. It was a birthday to be remembered.