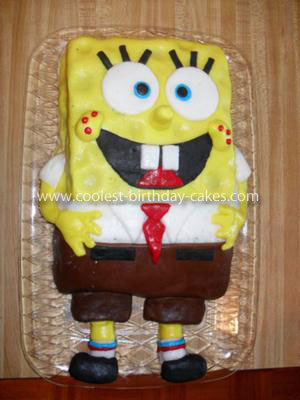 For my son’s 4th birthday party, we decided on a Spongebob theme! After watching many, many marathon episodes of ‘CAKE BOSS’, I found myself inspired to attempt at baking a “non-traditional” cake. Since I love to create things and art is something I enjoy, (ie: sculpting, building, sewing, designing), I thought I’d have at it. This Fondant Spongebob 4th Birthday Cake was my very first homemade cake, in addition to my first time working with homemade FONDANT from scratch. I wanted to try this Philipino recipe for an “UBE” (pronounced oob-ee) cake which is a purple yam cake, which I made from canned purple yam jam. Then I put together homemade buttercream/whipped cream icing- delicious!

I used three 9″ pans, which I just filled up halfway with the batter to get the three tiers with buttercream between each layer. Then for Spongebob’s shorts, I used another 9″ pan but filled it to the rim with batter. I cut that in half and stacked them to get two thick tiers, making sure to line his shorts up and match the height to the rest of Spongebob’s body. Then I cut the edges off around the entire cake and established a good shape for Spongebob. Afterwards, I frosted the entire cake with a thin layer of buttercream to ensure the fondant would stick.

As for his legs, arms, and facial features- all that is 100% edible fondant which I just molded by hand (pictures online are great to refer to), no sugar paste or gum paste was used. I formed yellow fondant around a toothpick for Spongebob’s nose to get it stick up. The fondant itself was pretty easy to put together, with the recipe only consisting of five ingredients. I will say that I felt it was a bit greasy, so I tweaked the recipe and added more confectioner’s sugar until it got close to the consistency of moldable play-doh. My next time making it, I think I might even try adding some corn starch or unflavored gelatin possibly.

To get the pure white fondant color, make sure you use CLEAR vanilla extract, otherwise you will tint it off-white slightly. All of the other colors used, I dyed by hand with GEL food coloring (very important not to use regular liquid coloring), with the exception of the brown and black. These two were really hard colors for me to get since they require an immense amount of food coloring to achieve the correct depth- so last minute, I gave up and just went straight to Michael’s to purchase the Wilton brand fondant (not as tasty!) I had no trouble getting the perfect “Spongebob” shade of yellow I needed, the blue and the red was surprisingly really easy to achieve as well- I just used Betty Crocker brand Gel food coloring from the grocery store and I think I prefer it over the Wilton stuff. To overcome the flimsiness, I rolled the fondant on parchment paper coated with corn starch, then flipped it on to the cake! This made it so much easier! And then to get the look of the pores, I use the backside of different sizes of my tsp and tbsp measurers.

Lastly, I will say that this cake was AWFULLY time consuming to make since I decided to make the cake from scratch and because of all the attention to detail! I’m not gonna lie, I wanted to quit halfway through this labor-intensive project, but my husband kept me on track and gave me some words of encouragement! A bit of advice, if at all possible, sit down while molding and rolling out your fondant and as much as you can! I do hair for a living and stand up 8-10 hours a day and was tense and forgot to relax a little while making this cake. I probably spent anywhere from 4-8 hours each day for three days consecutively.

Day 1 was spent baking the Ube cake and allowing it to chill overnight and making the buttercream frosting. Day 2 was making the fondant, dyeing it, assembling the cake and putting half of Spongebob together (then it got too late). Day 3 (day of party) was spent on all of the finishing touches. In retrospect, this probably took me an overwhelming amount of time due to it being my first cake and some trial and error. Now that I’ve learned the ropes, hopefully my next cake will be more of a pleasant task. All in all, you will definitely need a nice neck and back rub after ANY tedious/meticulous project like this! But at the end, it is SO WORTH IT! Good LUCK! Hope this helps! 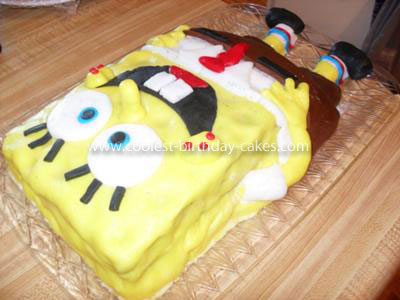