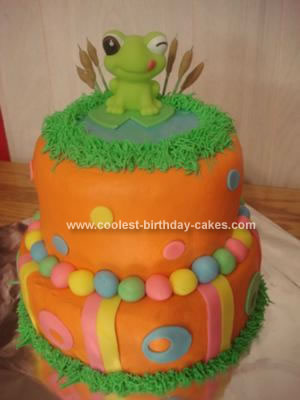 My niece was turning 2, and my sister wanted a super cute Frog Cake to go with the theme of her party ware. I struggled with ideas for this cake, and finally went to Bing to get some ideas. I decided on a two tiered cake, that has a frog on a lilly pad as the topper. I decided to make the cake a little more unique by using food coloring in my cake mix.

I used bright neon green and pink food coloring in two different cake mixes. I spooned the colors together in the pans to give it a tie-dye look. The kids loved it, and were amazed that they had two colored cake. I wanted to give it more flare as far as the cake itself. To match the colors on the party ware, I iced the cake bright orange. I used buttercream icing and then smoothed it all down with a viva paper towel. I added fondant accents to match the colors on the plates.

I had found this really cute rubber frog bathtub toy, and decided to use it instead of trying to make one out of fondant, mainly because I’m new to fondant and haven’t really had that much practice. I did want the frog to look like he was on a lilly pad on a pond. I used blue fondant and used a cookie cutter to make the pond. I used green fondant and cookie cutter to make the lilly pad. After cutting out the lilly pad, I just cut a small triangle out, to make it look a little more real.

Then I decided it needed a little something extra, so I took toothpicks and colored them with green food coloring to make stems, and rolled up some small pieces of brown fondant to make the cattails. To give it a more realistic look, I tipped in grass around the pond, and around the bottom to accent. It actually turned much better than I expected and was easier than I thought it would be.

The kids LOVED it, and I’ve even had a few requests from other parents for future parties!