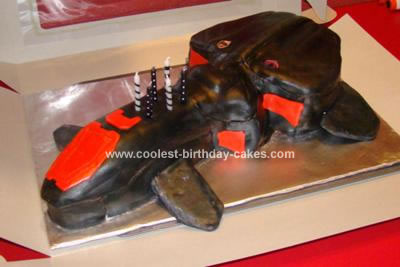 My son wanted a G.I. Joe party, so I built a replica of the “Night Raven” plane toy he has. I put his toy down on paper and traced around it to make a stencil of the plane and cut it out.

Then I estimated that I would need three 9 x 13 cakes to build it. I cut and stacked the cakes to resemble the shape of the plane. Then put frosting on top.

I then colored the fondant black and rolled pieces to cover the plane. I cut out red fondant shapes to resemble the detail work on the plane.

Finally, I cut out the shape of the wings out of cardboard that I covered with fondant for the wings. This was the only part not edible; but next time I would use something lighter to shape the wings. They ended up being too heavy to stay upright on the cake.

The kids knew what it was and really liked this G.I. Joe Night Raven Plane Cake and it was fun to make!