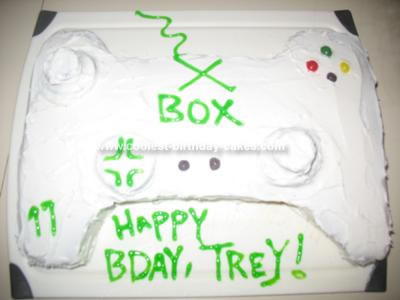 My son is a huge gamer, so I thought what a better idea for a Xbox 360 Controller Birthday Cake, he just turned 11.

I bought a standard white cake mix, I used white because I was making the white Xbox 360 controller. I baked the cake per normal directions (be sure not to use the egg yolks if you want your cake cake to be pure white). Use the Wilton cake release if you can, it comes out of the cake pan so easy and not one crumb!

Let cool in the pan for 10-15 minutes. Flip the cake onto a cake rack and cool for one hour. Once cool, freeze your cake for at least 24 hours. This will make cutting easier. Once frozen, cut your cake into the shape of the desired controller. I used white frosting (a regular Duncan Hines, whipped, keep at room temp to avoid ruining the cake). Frost the edges of the cut parts first to seal in the crumbs.

This Xbox 360 Controller Birthday Cake came out awesome, and my son was so impressed with my cake making skills! He was so happy to have a cake that had to do with games and systems, since this is his favorite hobby! The whole family thought it was fantastic! This was my first cake like this, and I thought it came out great, and it wasn’t hard to do at all! It’s hard when they cut into it!