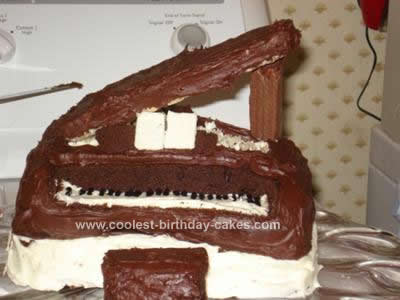 My 8 year old son came up with the idea of a Grand Piano Birthday Cake Design for his Dad’s birthday. We came to your site, but my son wanted to make a cake that was entirely edible. So I went to work to figure out how I could do it! I made 2, 8 inch square chocolate cakes, layered with chocolate frosting in between. I placed it in the freezer overnight, it makes it easier to cut. I cut the cake in the shape of the piano.

At the front of the cake, I cut out an area for the keys, leaving a little cake on the bottom of the area and the sides. I frosted the bottom layer with white frosting as well as the area for the keys. Using white frosting I made the “strings” inside with the tip that makes lines in the frosting. I frosted the rest of the cake dark chocolate. I used black icing to make fine lines to create the keys and the 2 pieces of music are the insides of an Oreo cookie, cut into rectangles, held up by some extra cake. The seat is just an extra piece of cake I cut off and frosted.

The lid: I made rice crispy treats and pressed them together as much as I could and as thin as I could. I cut them into the shape of the lid and placed in the refrigerator. When they were cold I frosted with the dark chocolate frosting. I placed the and music in the refrigerator until we were ready to put it all together.

Right before we brought it out, we placed the lid on the piano and held it up with a Twix bar. It was a HUGE success and Dad did not even want to cut it!!

Coolest Piano Cake – Music to your Ears and Stomach