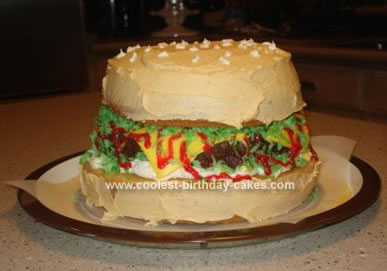 The chocolate cake (patty) was frosted with chocolate frosting that had crunched up cookies mixed in it to make it look jagged like meat. I tinted coconut green for the lettuce, used yellow fondant that I bought & cut it into triangles for the cheese. Then I bought Wilton’s red & yellow gel icing in a tube for the ketchup & mustard.

Last of all, I piped little sesame seeds on the top of the bun with white buttercream. I served it on a metal beer tray that had a piece of parchment paper on it. The crowd went wild! It was yummy too, except for the fondant!