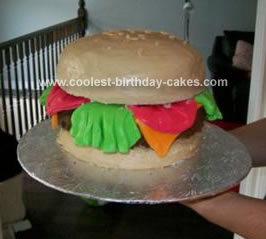 I was looking for a fun idea for a potluck BBQ with my new neighbours. I had signed up to bring a cake and had no idea what to do- I’m not the most handy person in the kitchen! I found this wonderful cake idea just by searching it out on the internet and it was an absolute hit. Without exaggerating, they were cheering for it when I brought out this Hamburger Cake. i almost cried!

I made 2x 8 inch pans for the bottom bun and meat patty. One in vanilla and one in chocolate cake, from Bulk Barn. For the top bun, I used a glass casserole dish to get the dome-like top. I crumb coated the buns (to learn how to crumb coat, just youtube it, it’s super easy), and iced the patty just with store bought icing, and pressed cookie crumbs against the patty to give it that meat-look.

My sister helped me whip up a batch of butter icing and we tinted it to the right colour with Wilton’s icing dye, and iced the buns. While it was still fresh, I pushed some rice krispies on the bun for sesame seeds.

For the veggies, I made my own fondant using the recipe found on this site. It was really easy! I was intimidated, but it’s a lot easier than you’d think. It can also be bought at Bulk Barn, pre-made. If you don’t have a stand mixer, I’d say buy it. I made tomatoes, lettuce and cheese very easily by using a rolling pin.

I put the whole thing together and I have to say the only thing I would change was that my toppings were placed a little low, and it hides the patty a little.

Anyone could make this simple Hamburger cake! I think I set my bar a little high in the eyes of my neighbours, and I dunno how I’ll out-do myself next block party!