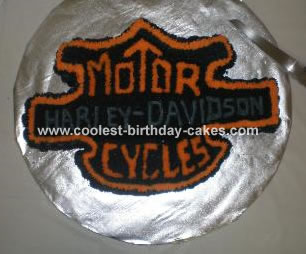 My husband’s cousin was getting married and his wife-to-be really wanted something original for the groom’s cake. Of course they are really big into Harley Davidson motor cycles and she asked me to come up with something.

I used a vanilla boxed cake mix and Wilton butter cream icing for this Harley Davidson cake. Note: The already mixed black icing gives best results. I can never get it as black as the already made kind. If anyone has and suggestions, please share. I simply cut the shape out of a sheet cake, free handed as you can you tell. It looked OK though. Everything was done in piped stars # 17. Except for the lettering which was tip number three.

This cake was pretty easy. I have gotten requests for several more since it was a big hit at the wedding. The hardest part is getting the cake to stay together after you cut it into the emblem of Harley Davidson. I suggest using a template printed from your computer to get an exact cut out. I really did not notice that there was such a big difference in the two sides until I took an actual picture of the cake. This was a trial run and of course I did not charge for this cake.

It was really fun to see everyone’s positive reaction though. I also made their 6 tiered wedding cake which went over well. Hope someone out there can use this idea for someone special.