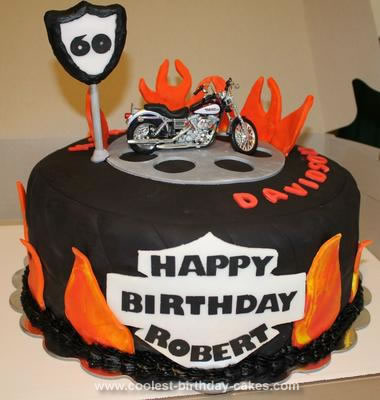 I made this Harley birthday cake for a friend’s 60th birthday. He really likes Harley Davidson and his wife wanted something special. It was vary easy to make.

I started with 2 twelve inch yellow cakes and iced them with cream cheese icing. Then I rolled out some black butter cream fondant, and placed it over the cake. I took a pizza cuter and rolled it on the sides to make it look like tier tread. I used some white fondant and added just a little black food coloring to make gray, rolled it out and cut a circle out of it for the hub.

Then I took a circle cookie cutter to cut the little circles. Placed it in the center of the cake. Then I took some white fondant and mixed red and orange food coloring to make the flames. I used the rest of the red to cut out the letters on the top that spell out Harley Davidson. I printed the Harley logo out on paper and cut it out and used it as a stencil. The black letters are sugar paper that I got at Wal-Mart.

It was a big hit.