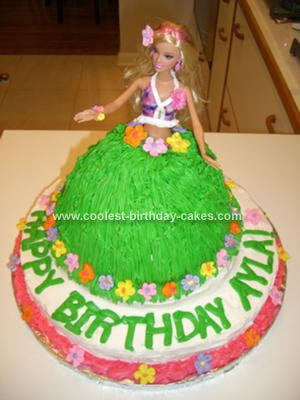 I made a 16 inch round pan for the bottom, a ten inch pan for the middle tier, and the Barbie cake on top for this Hawaiian Hula Girl cake. I used the Wilton wonder mold for the Barbie cake. I like to use Wilton cake release instead of cooking spray. I did use pieces of cut wooden dowels and cardboard for support in between each layer.

Each layer was a different flavor cake – the bottom was chocolate cake, the middle was dark chocolate cake, and the top was yellow cake. Wilton white creamy decorating icing (4.5 pound tub) was used for the cake using tip #789 and for the green hula skirt I colored the white icing with Wilton leaf green icing color.

At the last minute I added the Royal Icing flowers using the Wilton creamy white icing to hold them in place so the Royal Icing wouldn’t deteriorate due to the oil in the white icing. This is an easy and fun cake to make….my daughter loved it!