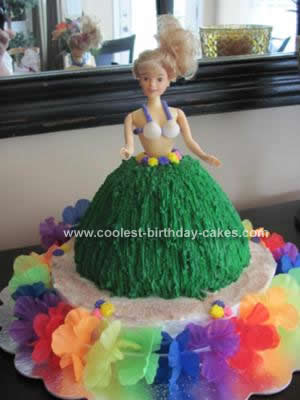 To make this fantastic Hula Barbie Cake Design I started with a 12 inch round cake for the bottom and used the Wilton Wonder doll cake pan for Barbie’s skirt. The cake pan came with a stick Barbie to use. Follow the directions carefully and the cake will come right out of the pan!

After the cakes have cooled I put a thin layer of buttercream on both cakes a little thicker one on the base. I placed the hula skirt on top of round cake and used tip #16 to make the grass skirt just pulling the tip in downward strokes. I used tip #13 to make the flowers around the waist after I placed the Barbie in the cake. I hot glued the shells on for her top and used tip #2 to pipe the straps on.

For a finishing touch I sprinkled cinnamon sugar on the base cake to make it look like sand and placed a lei around the base. It made it look great and was much less work! It was a big hit at the luau themed birthday party. 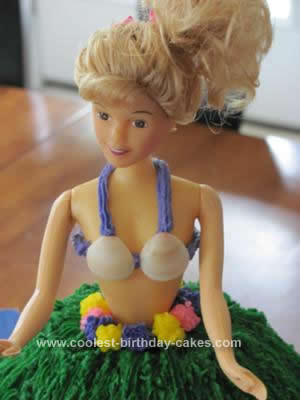