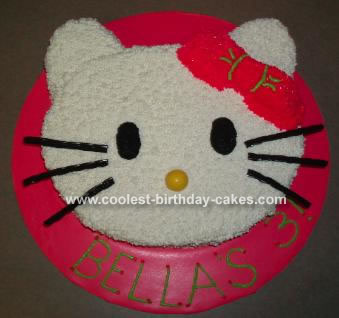 I did this Hello Kitty cake for my little cousin who was turning 3 and really likes Hello Kitty. I got my design idea from this website. I started with two 12 inch round butter cakes that I made from scratch but I am sure a box cake would work just as well. Before sculpting the cake I wrapped the layers individually with press-n-seal wrap and foil and put them in the freezer for about 2 hours.

While the cakes were in the freezer I cut up fresh strawberries (about 2 and a half cartons) into small pieces. I then mixed in a small package of strawberry Jello with the fresh strawberries using a big spoon. When I felt like the ingredients were mixed well I added 2 cups of Cool Whip and continued to stir until the Cool Whip was completely mixed in. I then covered this mixture and put it in the refrigerator for about 2 hours (it should be a little thicker then when you started).

After the cakes had been in the freezer for 2 hours I took them out and cut a little off of the top and bottom of one 12 inch round to make the shape more oval. I then layed the oval I cut on top of the other 12 inch round and cut around it to give me the 2 layers that I needed. I used the scraps to piece together the ears with the help of some white buttercream icing. I also saved some scraps to make a raised bow for Hello Kitty.

I used two 16 inch cake boards that were taped together and covered them with hot pink wrapping paper. I then placed one of my cake layers that was already cut to the oval shape down and piped a BC dam around the edge to hold in the strawberry filling. I then put down my strawberry filling and then placed my second layer on top. At this point I put the cake back in the freezer for about 30 minutes to make sure the filling would not leak out. Once the filling was set I positioned the ears and attached them with icing (the ears did not have strawberry filling in them). I also positioned the scraps that I saved for the bow and attached them with icing. After that came all of the stars, white home-made BC for the fur and rose pink home-made BC for the bow. I used chocolate covered almonds for the eyes. I pushed the almonds into the cake and then covered them with black icing so that I could make them a little bigger.

The nose is a gumball and the whiskers of course are licorice that I trimmed to the size that I liked. I then wrote the message in lime green BC (lemon yellow and a little kelly green mixed together) with pink polka dot accents along the bottom of the cake board and added a little touch of green to the bow. I think that it turned out pretty well and the birthday girl loved it.