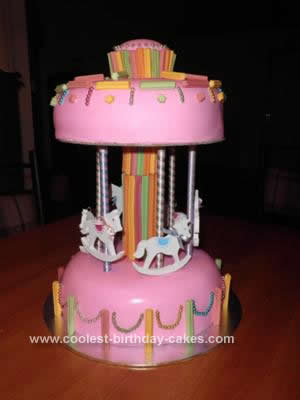 I made this Horse Carousel Cake for my daughter’s 1st birthday. I made 2x 8inch round cakes. One was vanilla sponge. The other was chocolate sponge. A packet mixture would be fine. I levelled the cakes and filled them both with jam and cream. I dirty iced the cakes with dream whip. Then covered both cakes with pink fondant. The top of the cake is a cupcake covered in fondant.

Decorations – I used a cylinder (from a Gladwrap box) and covered it with musticks (I used royal icing to “glue” the musticks on to the roll). The horses and poles are just from a craft shop. I used a white craft paint to paint the horses white and then markers to draw on the saddle. I made a ribbon bow and then glues it on the horse neck. The poles are just wooden poles which I wrapped ribbon around. The rest of the cake is decorated with musticks and cashous balls which I “glued” on using royal icing.

The kids loved it and so did my daughter.