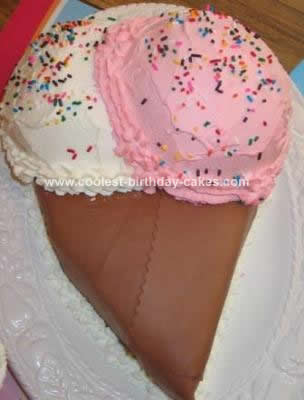 For the ice scream scoops, I baked the 2 halves of the Wilton 3D ball mold. For the cone, I baked a rectangular cake, then cut at an angle to make two large triangles. I then stacked the two triangles and cut the sharp point to make the angle more realistic to a cone.

I also carved out a small half circle out of the top for the scoops to sit in. I covered the cone in rolled fondant colored and flavored with cocoa powder. I took a smaller 2nd piece and layed at an angle to make the overlap look of the ice cream cone. I used toothpicks to hold the ice cream scoops in place. I iced the scoops with a whipped icing recipe from Wilton. I then used regular ice cream sprinkles over the top of the scoops.

My Ice Cream Cone Cake Idea was a huge hit!