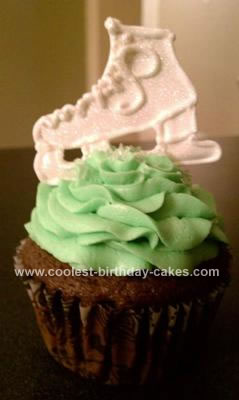 My daughter is an ice skater so I made her chocolate cupcakes with butter cream icing – tinted to be lime green. The ice skate is royal icing.

After the outline was made I put more water into the royal icing until it was the consistency of paint. Then I used a squeeze bottle to fill the icing.

After the boot dried I retraced the boot with the stiff royal icing and added laces and finished it with luster dust so it would sparkle. Sounds hard – but it wasn’t – just takes time and a steady hand.