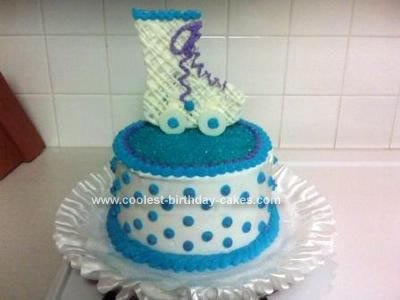 This homemade Roller Skate birthday cake is a double layer, 8″ cake, frosted with buttercream frosting. I tinted a portion of frosting in Sky Blue and used a fat star tip to put polka dots around the outside of the cake, as well as a rope border around the bottom and top. I then tinted a small portion of frosting in Violet, and put purple centers on the polka dots and around the top border with a small star tip (a Wilton #16 is what I used).

I filled in the entire top of the cake with bright blue sanding sugar. For the skate, I cut a boot-shaped piece of wax paper and placed it on another piece of wax paper. You will need two of these. I melted some white candy melts in a decorating bag and cut the tip off the bag. I drizzled the candy melts back and forth, diagonally in both directions, to make the lattice pattern. It won’t matter if this goes off the edges. Before the candy hardens, I lifted the boot-shaped wax paper off the other wax paper and placed it aside to harden.