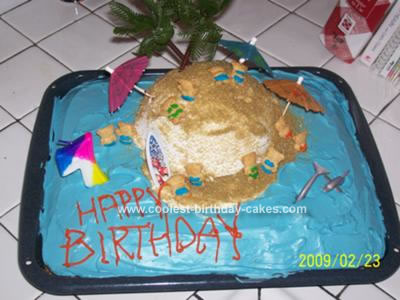 I have just began making cakes and this island cake is the third one that I have made so far and for someone that is not very creative I have been doing well. I have visited this site many times and have looked at pics to come up with ideas for cakes.

This cake in particular is a beach scene. My son wanted a luau in the middle of an ice storm this year. So I baked a 9×13 cake as directed and put it in the refrigerator to cool so that my icing would not mess up the cake itself while spreading. I also baked a 3D ball cake, courtesy of Wilton Cake pans. I also cooled it.

I then used food color to make my ocean water and spread it on my cake trying to make waves in it with a butter knife; I then put my island on top of the cake and put vanilla icing on it and colored sugar for sand on top of the icing; I had bought some teddy grahams from the grocery store and some icing in a tube and made bikinis and swimming shorts on my cookies the night before and left them out to dry completely.

Finally I had bought umbrella toothpicks for the party and some little dolphins and palm trees and put them where I thought they needed to be. This cake was a BIG hit and I loved making it!