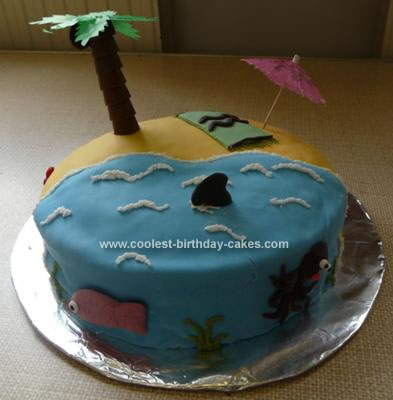 Our Guide unit was running a Tropical Island themed cafe evening to raise money for charity so I decided to make this cake to be raffled.

The Tropical Island Cake is simply 2 homemade vanilla sponges baked in round cake tins and stacked on top of each other with buttercream icing in the middle. The two cakes are necessary to gain enough height for the decorations around the side.

The cake is covered with roll out regal icing which I coloured myself and the octopus, fish, shell, crab, starish, shark, coconut and towel are made using the same stuff. I moulded their shape myself and stuck them to the cake using writing icing. The coconut was also rolled in desiccated coconut which I had coloured brown.

The palm tree is made of Rolos with cocktail sticks holding it together through the middle. Its leaves were cut out of green crepe paper and I then stuck them and the coconut on with cocktail sticks. The umbrella is simply a cocktail umbrella. I did additional detail such as the foam, the blacks of the eyes, the seaweed and the towel tassels with writing icing. 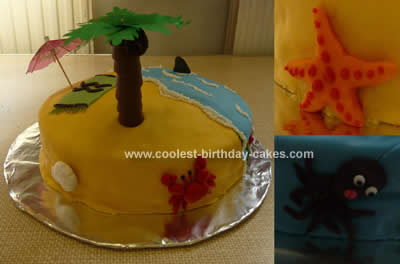