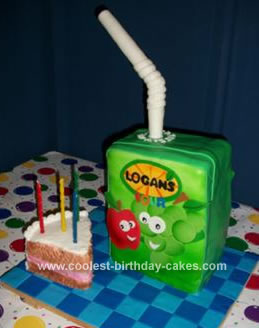 This Juice Box Birthday Cake was actually very easy to make! I started with a wooden base and drilled a hole in it to attach a ½” PVC pipe about 15” high. I used two 2” high half sheet cakes and cut out 6 rectangles to stack for the box. I stacked the cakes and filled them over the PVC pipe. I placed two cake separators every two cake layers to make it easier to cut later.

After chilling the cake I cut it to make all of the layers straight and even. After a crumb coat I covered the front and back with white fondant. I used an airbrush to color the fondant to match the gradient of color on my juice box model (Mott’s for tots Apple White Grape).

Next, I covered the wooden base with the blue fondant “tiles.” I covered the sides of the box next making sure that the width was the same on both sides. The top was made in two pieces to replicate the top fold of juice boxes. With a cookie cutter I cut out a hole to thread the top piece over the PVC pipe. I used a serrated fondant tool to define the fold on the top, too.

Most of the decorations on the juice box were cut out using cookie cutters. I did the ovals, mouths, and apple body by eye. I used my airbrush to give all of the pieces some dimension. I attached each piece one by one with a tiny bit of water. I used some toothpicks to hold things in place until they dried completely.

I attached a 45 degree PVC connector and another short piece of PVC to the end of the pipe that was still sticking through the top of the cake to finish the structure of the straw. I first covered the two straight pieces of pipe with fondant. Then I covered the connector. After the connector was covered, I used a fondant ball tool to define the folds in the bending part of the straw.

The cake slice was just cut from a 10” round cake. I stacked and filled it and covered it with buttercream icing. I used a waded up paper towel to texture the icing on the sides to make it look more lake cake. Then I airbrushed the brown cake and pink filling. I smoothed out the reset of the white icing and did some basic shell borders to make it look like a standard store bought birthday cake.