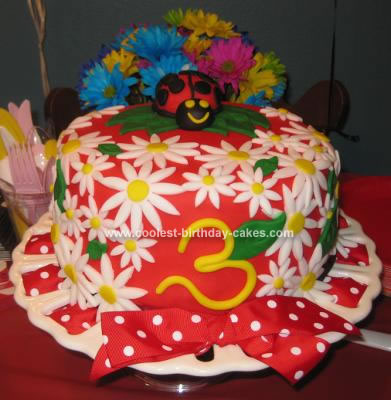 I got the idea for this Ladybug 3rd Birthday Cake just by asking my daughter what cake she wanted for her birthday. She was about to turn 3 so you can imagine what her answer was. Uhhhhhmmmmm, a butterfly, no a princess, no a watermelon, etc.

Finally, I decided to find pictures of cakes online to see what she liked best. She eventually decided on a ladybug and Daddy agreed so that was it. I did a lot of research online about the best way to do a cake. I decided that fondant would make the prettiest cake. The problem was I had never worked with fondant and really had no idea if it would work for me. So I did a test cake.

I went to the store and looked to see what they had in fondant. Well I went to the wrong store because all I found was white fondant and from my research learned that it is pretty hard to dye fondant red and black. But I took it home and tried it anyways. I learned that yes, it takes a very long time to dye it red so I made it pink and decided to not even attempt black. After all, it was just a test cake so I didn’t really matter what color it was.

After I was done with my test cake I went to a different store and found colored fondant that was pretty cheap (in cost not quality). But I just wasn’t sure about the taste of the fondant. It is not very tasty so I asked a friend for a recipe that she has used in the past. It was a super yummy cream cheese fondant. But it fell apart as soon as I picked it up so that was not going to work. So I decided I would just use the stuff from the store and tell everybody they did not have to eat it.

My next task was covering the cake with flowers. I rolled white fondant out and cut the daisies out using a cookie cutter. I used different sized cutters so I would have a variety of flowers. Using just a little bit of water on the back of the flowers I attached them to the cake. I also rolled green fondant and used cookie cutters to cut out leaves for the flowers. I used the icing spreader to put the detail on the leaves. I then rolled out yellow fondant and cut circles in it to make the center of the flowers. I also used the yellow fondant to make the face on the ladybug.

I kind of felt like I was playing with play dough. It was a lot of fun to make and my daughter loved it. It was very rewarding to see the look on my daughter’s face when she saw it for the first time.