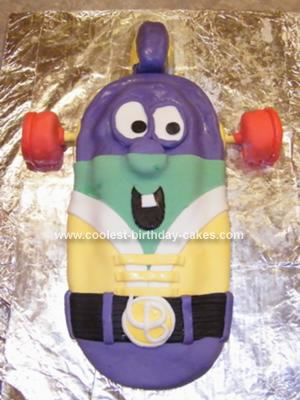 My son, Eli, wanted a Larryboy cake for his 5th birthday. The only cakes I had ever made and decorated were basic cake and frosting kind. Nothing creative. I knew I probably couldn’t buy a Larryboy cake at my local grocery store, so I decided to research them and give it a shot. Many of my ideas came from this website and they were so helpful. I even found a picture here that I used somewhat to model my cake after.

I used a 9×13 cake pan and two round cake pans, using two store bought cake mixes. I trimmed the rectangle cake a bit, and cut one round cake in half and put on either end. I also built up the middle to give a more 3D look (also an idea from this site). I used the second round cake for the super suction ears and his nose, using a biscuit cutter for shape.

I iced the cake with store bought frosting. I used marshmallow fondant to cover the cake. We, my mom and I, colored fondant purple, yellow, red, green, and black. Everything on the cake was edible, except for the straws we used to hold the ears on with.

I was pleasantly surprised at how well it turned out, and that it wasn’t nearly as hard as I anticipated. My son loved it, and that made it worthwhile.