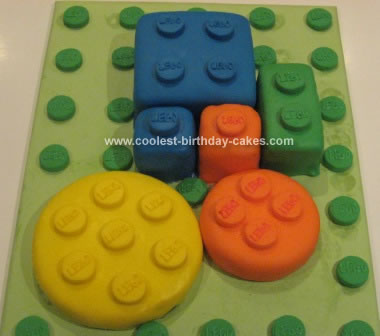 I created this Lego Birthday Cake for my son’s 8th birthday party.

The cakes were cut to size to ensure smooth edges and flat surfaces. Two of the 8×8 cakes were doubled up to make the 4 peg brick. The two peg and single peg bricks were made using the other 2 8×8 cakes. After doubling up the cakes, I cut the cake in half and then cut one of the halves in half again.

Two days before the party I iced the individual bricks with buttercream icing. This was a skim coat to prep the cakes for the fondant. The cakes were stored in the refrigerator after the crumb coat was applied. I also colored the fondant 2 days before the party to let the color set up. Using Wilton White Fondant (2 5# boxes – I could have probably got away with just one as I had a lot left over)and gel coloring I preped the fondant. Wrap it tightly in plastic wrap and store at room temp.

One day before the party I covered each of the cakes with the appropriate fondant color. The pegs were created by rolling the fondant out to 3/4″ thick and then cutting with a 1.5″ circle cutter. I used buttercream icing colored in the appropriate shade and a piping bag to write LEGO on each peg. The pegs were placed on each of the bricks. We covered a large cardboard with green paper and then spaced the remaining pegs equally to create the base plate.

I did a practice cake the weekend before as this was my first time using fondant – I was a bit intimidated by all I had researched. It really was not that bad. There are a few good videos on YouTube on how to cover a square cake with fondant that were very helpful!

The cake was a HUGE hit with my son’s friends.