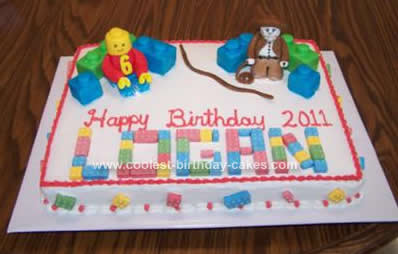 I made this special Lego Birthday Cake Idea 11 X 17 (½ white, ½ chocolate) for my grandson’s 6th birthday after looking online for ideas for Lego cakes. Here is my completed birthday cake.

I made two different Lego guys using fondant which I did a week before I made the birthday cake. I shaped them just by looking at pictures. I molded one in a sitting position and the other standing. The blue and red Lego guy has a number 6 on his shirt and the other Lego guy is supposed to mimic Indiana Jones (my grandson’s favorite).

I also made a snake and a whip (in Indiana Jones hand) using fondant. I used the food writing markers to draw the face, buttons, collar and belt on both an also for lines on snake (after they were really dry).

To make the Lego’s that are on top of the cake I used an angel food cake bar because it was a firm cake that I could cut easily. I cut the “Lego” out and then a circle piece to put on top of the Lego to make it look realistic. I then used a frosting glaze made with confectioner’s sugar, milk, and corn syrup and neon food coloring to pour over the cake Lego so it would be smooth and shiny.

I also did these a week ahead of time and put them in the freezer. They worked great when I placed them on the cake while still frozen (they did not melt into my frosted cake when they thawed, whew).

I was able to find the Lego candy blocks, so I used those to shape his name and then placed a few candy blocks around the outside of the cake. The kids loved it. I also made the Lego head pops (made with marshmallows and coated in yellow chocolate. I painted faces on those with Gel Icing and a dab of lemon extract (for faster drying).

FUN, FUN, FUN – the kid’s and adults all loved the cake. 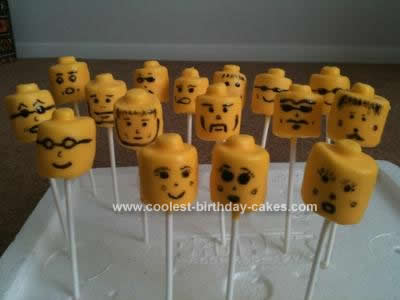