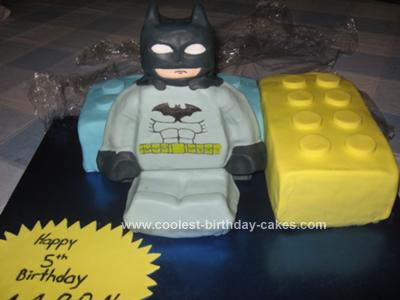 This Lego Batman cake I made was a labor of love. It took a few months to plan it, as I was a little undecided on how I would display it. The one constant element was the actual Lego Batman, as my 5 year old was obsessed with the game. How I would make it, was the hard part. After a lot of research online, I decided that my best option would be to purchase a Lego man cake pan, and re-sculpture it.

I tested the cake, using a dense cake mixture (like mud cake), to see how it would turn out, so that I would have some idea on how I would display it, and most importantly, how I was going to ice it!

I wanted Lego Batman to sit, so I cut the cake in half at the torso; I also cut the tip of the Lego man head, but kept it in order to make Lego Batman’s bat-like ears. As the cake was sitting I also had to use rods to keep it upright, or it would most definitely fall. I had colored all the different colored fondant by hand which was very timing consuming, we are talking hours here; but I had done this a couple of days prior, so that when the cake was ready to be decorated, I’d be able to do it in one go.

I then started to assemble the cake in a lying position, starting with the grey suit, then onto the face and mask. I drew the ‘abs’ detail while Lego Batman was in a lying position also. I referred to a picture to try and get it as accurate as possible. To complete the Lego Batman, I cut out a cape for him, but this also covered any lack of fondant I had at the back of him, or mistakes for that matter!

As the Lego Batman cake was so small, I decided to bake a couple more cakes, and shape them into Lego blocks, so that this would essentially be the cake everyone would eat. I used two loaf pans and then just cut them in a more straight rectangular shape, rolled fondant over them and cut out circular shapes to put on top. Although this cake was labor intensive (it took around 24 hours over a few days), I was really happy with the final result. My 5 year old son was ecstatic, as was his friends too.

I have added 2 pictures, the 1st is the whole cake, the 2nd is just a close up of Lego Batman. Thank you. 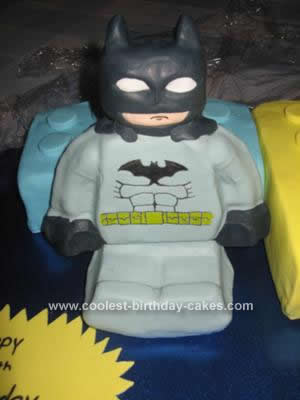