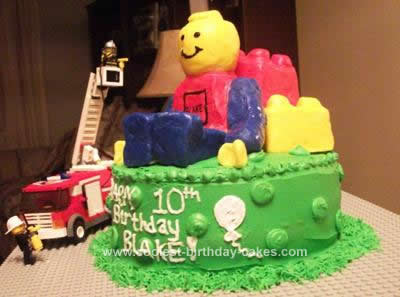 This Homemade Lego Man Birthday Cake was a labour of love. My friend needed a cake for her nephew, and so after finding out that he loves Lego, we decided to try our hand at a Lego Man cake.

I had never worked with fondant before, so this would be a first for me. The base of the cake was French Vanilla, covered in a primary green buttercream icing. The Lego blocks and Lego Man were fashioned out of Rice Krispie treats. We shaped the blocks, and used Quaker Crunchers for the “knobs” on top of the blocks. Then we covered the blocks in finely rolled fondant, in primary blue, red and yellow. My friend worked very hard to smooth the fondant over the blocks, while I attempted to smooth the fondant over Lego Man. It was certainly a challenge!

The fondant took on the imperfections of the Rice Krispie treats underneath. Since making this cake, I asked my Wilton instructor how I would avoid this look in future, and she suggested rolling the fondant a little thicker. I am now taking the Wilton fondant course, and look forward to being able to work with fondant on future cakes!

The addition of the Lego fire truck with the fireman on the ladder to put out the flame on the candle was really a great idea, as was using a Lego board underneath. The birthday boy got to keep the Lego to play with, and as reminders of the cake that he absolutely loved! One caution – make sure you have something strong to transport this cake – the Lego board is very flexible, and therefore doesn’t hold the weight very well on it’s own! 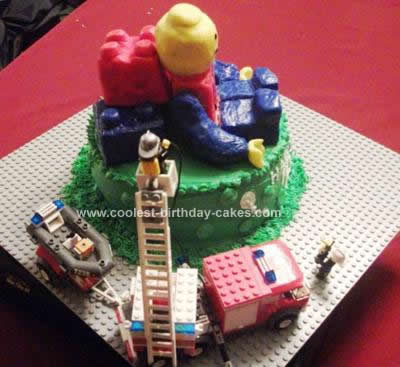 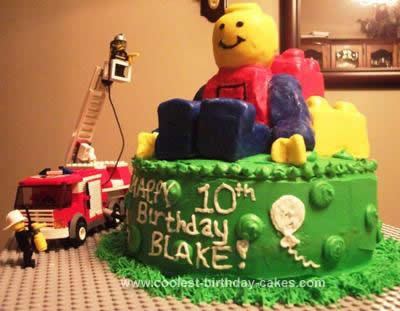