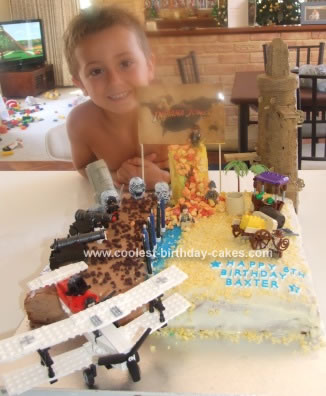 When I asked my son Baxter what type of cake he wanted for his 6th Birthday, I was not surprised when he answered an Indiana Jones Birthday Cake. I searched the net and saw lots of ideas, but decided to keep it simple and utilize the many pieces of Indiana Jones Lego we had around the house.

The cake was simple, just made a rectangular chocolate cake. Used Icing sugar, melted butter and milk for the icing and mixed half with cocoa and the other half with orange food coloring.

We wanted a desert scene, so used a Jam roll as a volcano (just cut the roll in a triangular shape), iced with the yellow icing and topped with jam which ran down the sides to look like lava. Once positioned on the cake, I added Space Rocks (candy shaped likes rocks and coloured yellow, orange and red).

I used the Indiana Jones Logo (printed from the net) and glued to cardboard and sticky taped to Kebab Sticks.

Harry and Baxter then helped me position all the Lego. I positioned Indiana Jones on the top of the volcano and his friends on the desert side. All the ‘baddies’ on the dirt side, positioned with guns blazing!!

So simple but looked great, the smiles from my children and the other dozen at the party said it all!