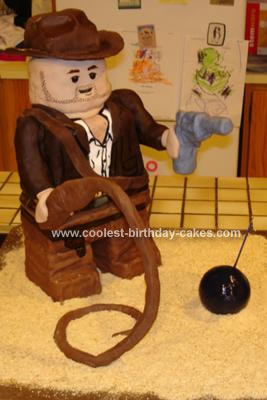 My husband & I co-made this Indiana Jones cake for our nephew’s 6th Birthday. He’s a big Indiana Jones Lego fan & this cake was a surprise. His first comment upon seeing the cake was “Wow, I got a pinata for my birthday!”.

To make it we used 2 loaf pan cakes(Orange Chocolate Sourcream cake. These cakes formed the legs. Then I had two more plain chocolate loaf cakes for the upper body. We put a layer of firm sponge between the legs & the upper body & supported it with card board. The very sound structure beneath it all was made by my husband with 2 dowel leg prongs screwed to the base board.

Then at the top of that was a horizontal shoulder support which was attached after each cake piece had a hole drilled & threaded onto the supports. Then the arm dowels were attached & positioned into figure shape & a piece of wire attached to the end of the whip. The wire was covered with fondant molding icing.

The details I hand painted with food colouring gel which was easy enough with a number of Indiana Jones Lego pictures to use on the internet.

The base board we covered with liquid honey and covered with cookie crumbs to replicate sand. The black ball was a last minute thought as we needed somewhere for a candle to sit. It was very late at night & we had run out of fondant so a painted polystyrene ball with the bottom leveled did the trick. The cake took approx. 10hrs to make & cost about $50.

It took 5 packets of molding fondant to decorate it! It’s final standing height was 43cm (17″). It survived a 30minute drive in the back of our van to the party, some of it on a country road!

The look on my nephew’s face was priceless & the consideration as to how to cut it was a challenge to say the least. 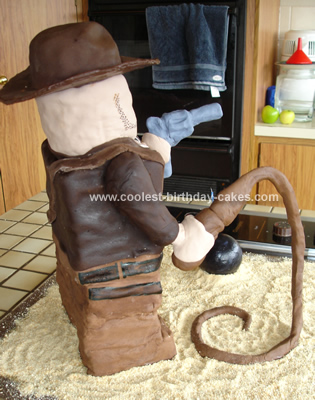 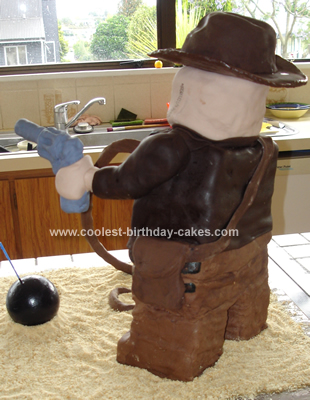 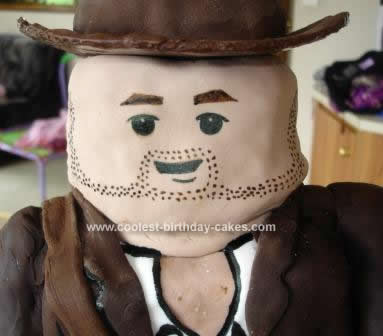