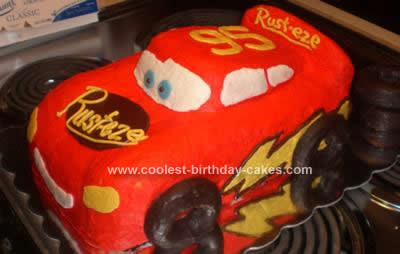 For this Homemade Cars Lightning McQueen Birthday Cake I started with two 9 x 13 sheet cakes (one chocolate and one yellow) and ½ a cake mix (chocolate) in a loaf pan. I just made cupcakes with the extra batter and gave them away.

So I iced between the two sheet cakes and carved the front to look a little more rounded like Lightning McQueen. Then I took the loaf piece and cut it horizontally at an angle to get my top piece, placing the large end facing the front for the windshield. I placed it far enough back on the cake that the thin end was almost at the back of the sheet cakes. For the spoiler, I actually had to piece that together with what I had left from the loaf pan and I secured it with toothpicks.

I would recommend using the other ½ cake mix for a second loaf pan and cutting the spoiler out of it. It would have been much easier that way!

After it was all pieced together and carved out, I gave it a crumb coat and put it in the refrigerator overnight. I used homemade white chocolate buttercream frosting for the whole cake. I mixed up most of my icing with no-taste, red food coloring (I expected using enough to coloring to get it red would make it taste nasty otherwise). I iced the cake in sections. After each section, when the previous section had glazed over but not gotten too set-up, I took a plain paper towel and patted down the icing to remove most of the stroke marks (I prefer the fondant look, but haven’t found any that tastes good!).

Once the red was done, I used a bit of chocolate canned frosting and piped in an oval on the front hood. I used a toothpick to scrape across the top to make it look smooth. Then I mixed up some yellow frosting which came out really bright, so I added a little chocolate icing to it to make it more of a mustard color. Then I piped the words onto the hood and the spoiler and added the 95 on top of the roof.

I piped on headlights and the lightening marks on the side next using one of my son’s cars as a guide. I also let this sit and then pressed with a paper towel to make smooth. Then I outlined the lightning in chocolate icing. Next, I used the plain white icing to pipe on windows and a smile, letting set a little and pressing down as explained before.

Finally, I mixed up a little blue for the eyes and piped them on, pressed and added a chocolate dot to each.

For the wheels, I used chocolate donuts sliced in half, and used the leftover chocolate frosting to stick them to the cake. I had to shave a little off the bottom of each donut so they wouldn’t stick up too far. I stacked the remaining donuts behind the cake as extra tires and used cut-off wooden skewers to attach a banner with my son’s happy birthday message.

And that about sums it up. It turned out great and tasted great too! 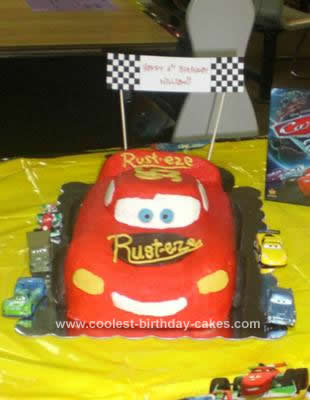