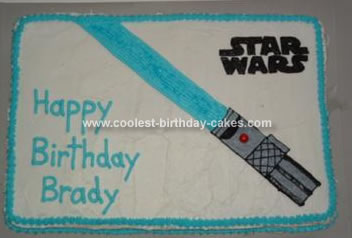 My son’s best friend was having a Star Wars party. He requested a blue Lightsaber Birthday Cake. I made a funfetti 1/2 sheet cake, frosted it in a buttercream icing and went to work!

First I printed out a reverse picture of the Star Wars logo. I placed it under plastic wrap, traced it with icing and then transferred it onto the cake. After I filled it in, I moved on to the Lightsaber. I took my son’s Lightsaber and practiced drawing it a few times on a sheet of paper until I felt good about it.

I then drew it out with a toothpick, then in icing, filled it in and sprinkled blue sprinkles on it to make it “glow”. I finished it off with a red M&M!

It was a huge hit! Now my son wants one for his birthday, but has told me it has to be different!