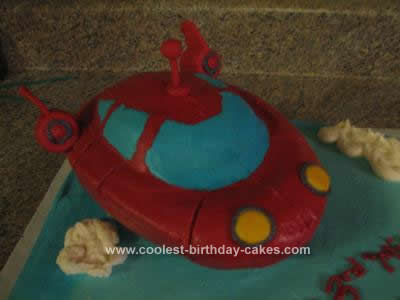 I was around 12 when my mom got me my first plastic decorating kit, and I was hooked! I’ve made dozens of cakes over the years, and now that I have my own kiddos, well, it’s even more fun, and challenging. My 3 year old loves “Rocket” so thought I’d give a Little Einstein Rocket Birthday Cake a whirl! Thankfully he has a Little Einsteins sticker book with many different views of Rocket!

I used the Wilton’s Egg Pan, and filled both halves about 3/4 full. I figured if I messed one up, I’d have a backup! I didn’t bother leveling the cake and used the crown or “hump” to my advantage. It was quite easy to shape after freezing it overnight, I basically shaved the sides of the crown to create the cockpit.

I made the engines and antenna out of red fondant. For the antenna I rolled a small amount of fondant onto half of a toothpick, made a separate little ball and pre-poked a hole in it, then poked it onto the fondant end of the toothpick. For the engines, I rolled a cylinder, poked my finger into the front and back to create a depression that I later filled with a small blob of dark gray frosting, and a smaller blob of red frosting. I shaped the wing into a rectangle then just curved the top with my fingers.

I used a butter knife to add detail to the wing, and poked tiny holes with a toothpick for the rivets. After cutting a crack into the top of the cylinder, I placed the wing into the crack and carefully pinched it shut. I pushed a toothpick into the side bottom at an angle so I could later poke it into the side of the cake.I let the fondant pieces harden over the next 6 hours, but they could definitely be done ahead of time!

I gently placed the (half) egg upside down to ice the rounded bottom first, using a dark gray buttercream icing and iced it to within an inch of the “top”. I let my icing dry for a few minutes and then smoothed it carefully with paper towel.(I use Viva, the smooth one with no patterns or ridges). I then used a knife to create 4 shallow lines to simulate steel panels.

Then I placed it on a 12 inch square already frosted with buttercream in Sky Blue (Wilton). I piped a thick line of red buttercream all the way around, overlapping the gray bottom, and continued piping round and round till the base of the cockpit. I also piped the roof and back of the cockpit with red. Again I let it dry a few minutes, then smoothed it with Viva paper towel. You can really shape and manipulate buttercream when it has set. Just lay your paper towel on the icing and softly rub it with your finger tips, then pull it up and move to a different spot. I rounded the edges as much as I could.

I then piped the outline of the windows in sky blue and filled them in, then piped red between each window for the narrow panels. Again I smoothed everything with a paper towel once the icing had set.

I made yellow headlights, outlined them in a narrow line of dark gray, used a knife for panel details, and toothpick holes for the rivets. I piped a small red blob on the roof and poked the toothpick-antenna in, then poked the engines into the sides in such a way that they were supported by the cake. A blob of blue icing in the back indentation of the engine simulates the exhaust.

My son ate Rocket’s front end with headlights, and was super happy with his “Wocket”! 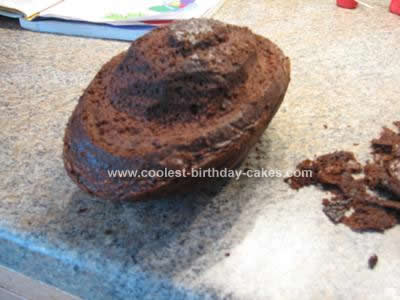 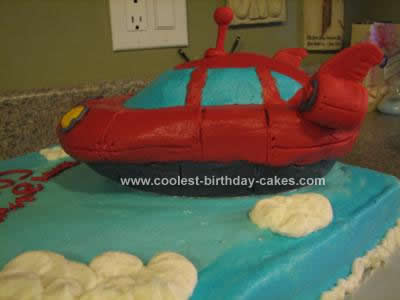 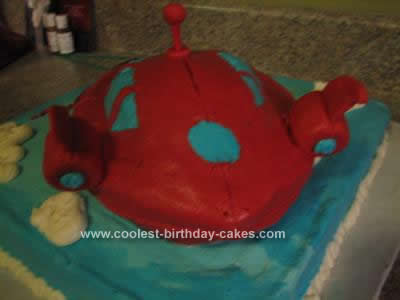