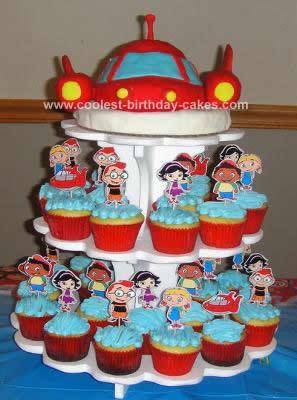 First I made an 8″ round cake and let it cool. Then I rolled out some white fondant and covered the cake on the cake plate. I set that aside. Next I baked around 36 cupcakes. When they cooled I iced them with the whipped icing colored blue (just a couple drops of the sky blue icing gel). I did use a bag to pipe the icing on. I set that aside. Next I made the general shape of the rocket (without the jet engines on the sides – I did those separate) out of the cereal treats. It was very easy to mold and shape the cereal treats. I then colored 1 pkg of the pre-made white fondant with the entire jar of the Wilton Red No-Taste gel. It took a long time kneading the fondant to get the color consistent throughout. Wear gloves. After covering the rocket with a thin layer of buttercream icing, I rolled out the red fondant and covered the entire rocket. Next I tinted some fondant with the sky blue color gel, and I made the windows on rocket. After that I shaped the jet engines that go on the sides of rocket with the cereal treats and I covered them with buttercream icing and then red fondant. I attached the engines to the base of rocket with toothpicks. The antenna on the top of rocket was made with a toothpick covered in fondant, and the headlights on rocket were made completely of fondant and attached with toothpicks. The rocket, when completed, sat on top of the 8″cake. This was centerpiece of our cupcake stand.

The finishing touch was the little guys that I stuck into each cupcake. I had found some clipart on the internet and printed them out on glossy photo paper, cut them out, and taped each one to a toothpick.

Needless to say, my daughter went bananas over her Rocket masterpiece. It was far from perfect, but considering it was my first attempt at anything of this nature I was EXTREMELY happy with the results!